I just got back home yesterday, after spending five days staying at the house of son #4 and his wife, Braveheart.  I went over there because they were due to welcome baby #4 any minute and needed Grammy on deck, ready to watch their 2-year-old triplets (identical twin boys Pumpkin and Peanut, and their sister, Paquita) when it was time to go to the hospital. 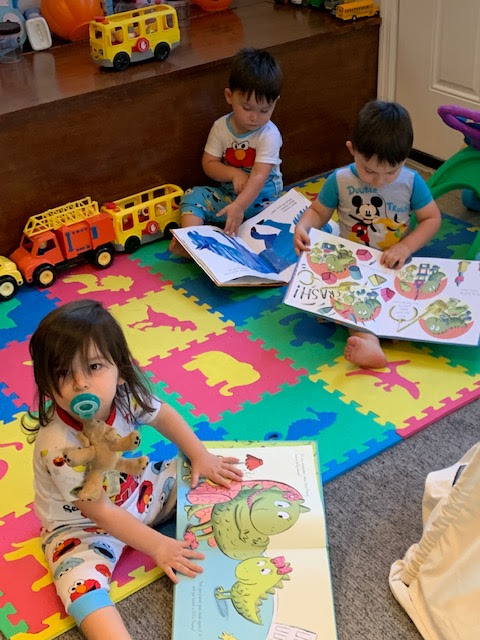 The first time around, Braveheart had had a C-section at 32 weeks.  She was told that therefore, even though this was her second pregnancy, her body might behave as if it was her first labor and  delivery--so it might be tough and take a while.  But of course we were all hoping that this would not be so.

Braveheart started having contractions on Friday, and who knew how quickly things would progress?  (Not as quickly as she and my son would have liked, as it turned out; not by a long shot!)  Just in case she was going to have a quick labor and delivery, I decided to pack an overnight bag and drive over that day to stay with them--even though we only live 35 minutes away and I probably could have made it in time if I'd been called last minute.  I figured that I could give my daughter-in-law a bit of a break and help out with the three munchkins until the baby came. (My husband was out of town but would join me when he could.)

Braveheart labored all through the night Friday and into Saturday, but still wasn't sure if it was time or not.  By late Saturday afternoon, the contractions were getting extremely painful (and although they were not coming regularly, when they did come, they lasted an agonizing three minutes each!).  The kids decided to head to the hospital, hoping that it was go time.  After more than four hours of observation, however, they were sent back home.  Braveheart was only one centimeter dilated and they said she really wasn't in active labor yet.

Then just a few hours later, at about 11:00 at night, my son woke me up to tell me that he was putting the triplets' baby monitor in the guestroom (soon to be nursery) where I was sleeping, and that they were heading back to the hospital.  My poor daughter-in-law was just in so much unrelenting pain.

This time, thankfully, she was admitted, and before long she was progressing nicely.  She had her water broken and received an epidural, and she was finally able to get some relief from the pain.  But her labor was long and difficult.  Her contractions were irregular and lasted much longer than normal.  At one point, it looked like she might have to have another C-section, and our son posted a prayer request on our family text stream.  The prayers worked: shortly afterward, she was fully dilated and ready to push.  Unfortunately,  though, she had to push for an exhausting three and a half hours.  Finally, just before midnight on Sunday October 27, she delivered a beautiful, healthy baby girl with a head of thick black hair.  At 8 lbs. 11.05 oz. and 22.05 in., she weighed more than twice as much as her largest triplet sibling at birth! 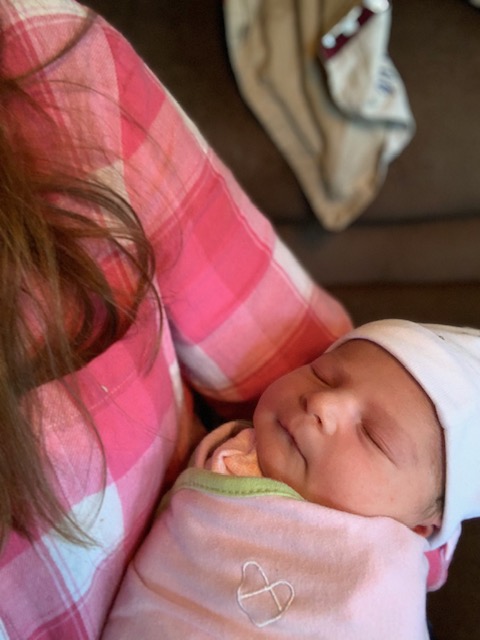 On Tuesday, this sweet baby girl (who shall heretofore be known here at the blog as Hermanita--which in Spanish means "little sister") came home.  Her brothers were largely unimpressed and uninterested in her, although they came over to check her out and smiled at her. 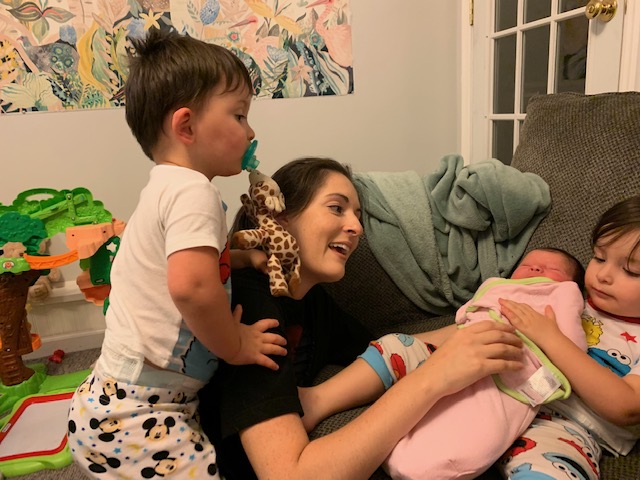 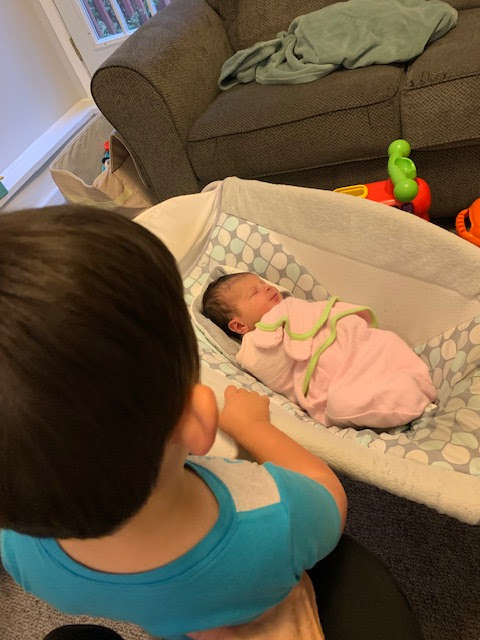 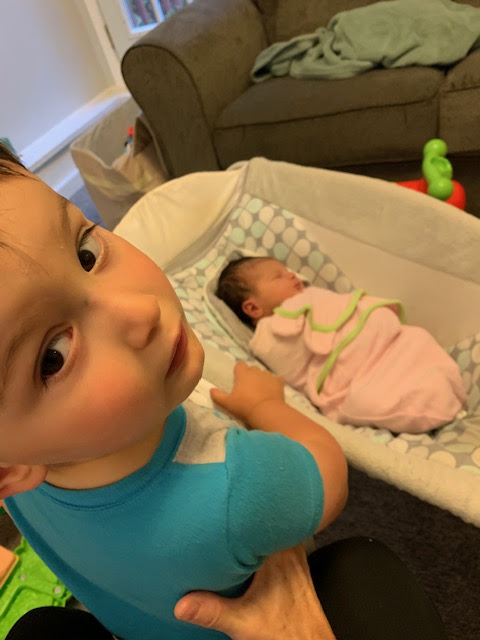 Her big sister, on the other hand, had a totally different reaction.

At first, Paquita was confused and jealous and couldn't stop crying.  But those emotions soon evaporated and were replaced by a wave of fierce maternal love and protectiveness.  (Who says girls and boys aren't wired differently?  That little girl, hardly more than a baby herself, had an instinctive desire to nurture that baby!)  She wanted to hold HER baby constantly, to kiss her and hug her.  She kept putting her chubby little finger to her mouth and saying "Shhh" to the rest of us as she held her baby sister. 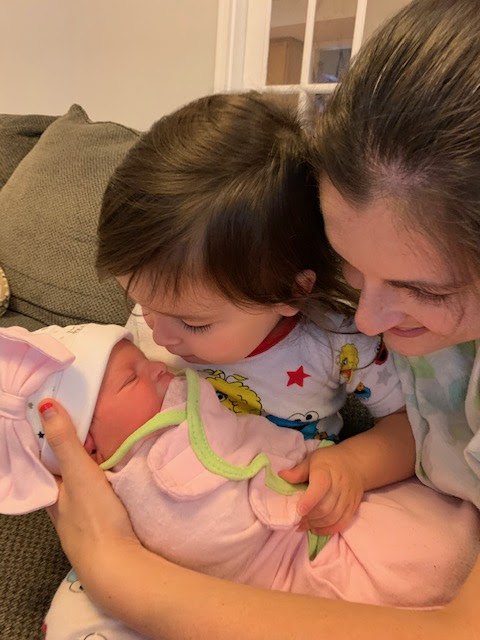 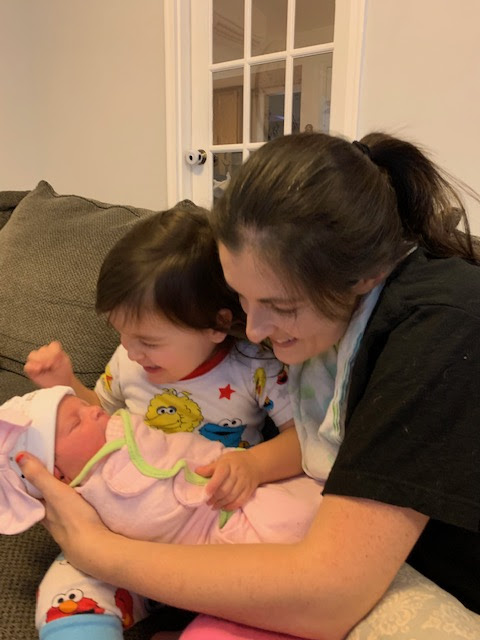 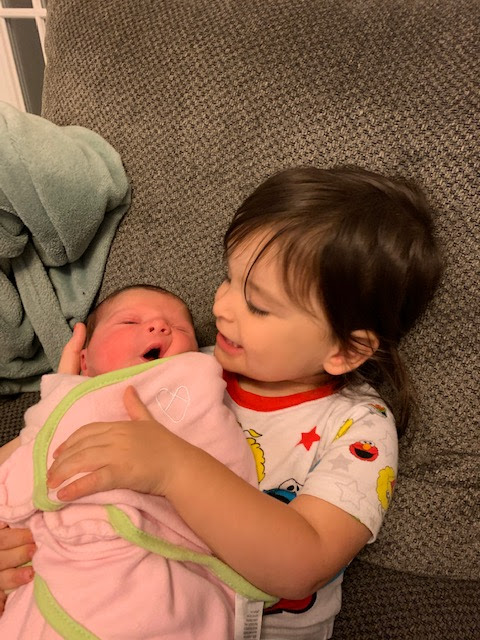 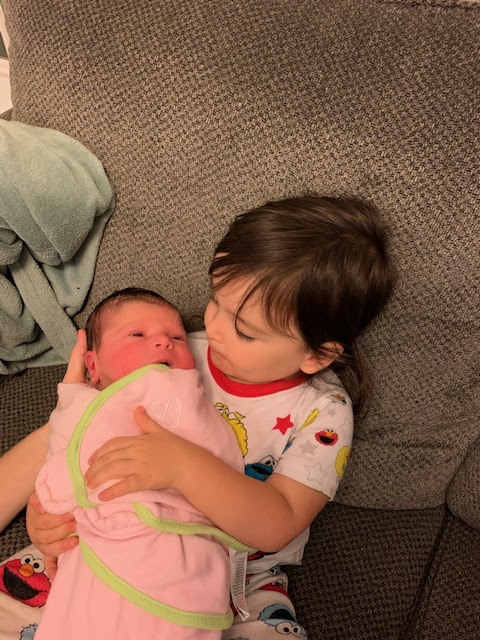 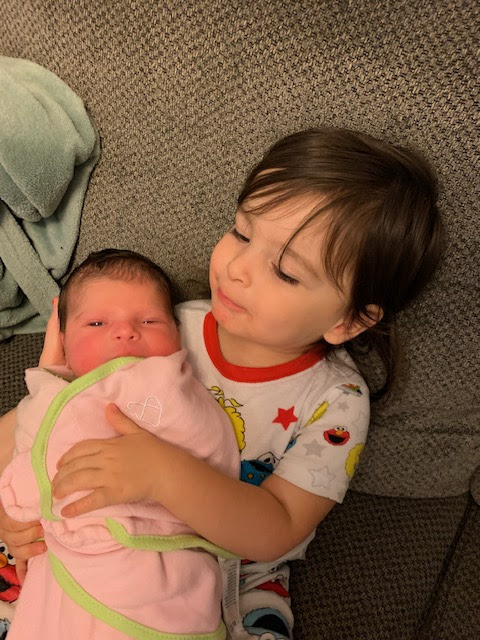 We were joking that Paquita might love the baby almost too much, if that's possible.  She's rather possessive and it's very hard to get Hermanita out of her arms--she puts up quite a fuss when that happens.  So Mom and Dad are going to have some challenges as their little family transitions from three to four children and everyone gets used to their new routines and their new normal.

I took some selfies with my precious new granddaughter soon after she came home. 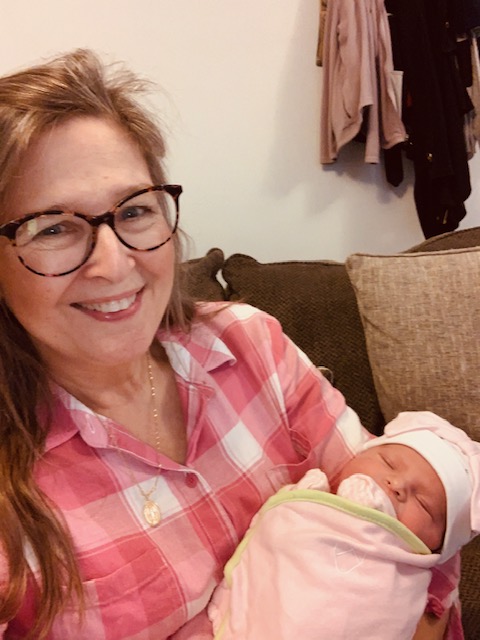 When I saw the above photo it reminded me a little bit of a snapshot my husband took of me and our firstborn son shortly after we got home from the hospital, way back in October 1983.   The way I was positioned and holding the newborn infants in these pictures taken 36 years apart looked so similar, not to mention the expression of pure happiness on my face (and tiredness, too: in the old one, caused by childbirth...in the new one, by childcare!).

I still wear ginormous glasses (wait long enough and everything comes back in style!).  I still wear my hair long (but it's thinner and grayer these days).   When it comes to my fashion sense, very little has changed.  But oh, in almost every other way my life is so different now!  That inexperienced young mom was on cloud nine after the birth of her first baby boy.  But she could never have imagined how much richer and fuller (how could that be possible?!) her life would be one day: how four more sons would follow this one; how all five of them would get married and bring her daughters; and how, just when she started to mourn the loss of her babies, she would get so many new ones to love.

And this grandmother is still recovering from five days of wrangling three very busy, very chunky toddlers. I've been catching up on my sleep and I believe a nap is on my to-do list today.  After all, grandchild #16 is due any time now, and I'm going to be on call to watch her three older siblings when her parents leave for the hospital, at least until their other grandmother arrives to take over...so I better be rested up!
Posted by Laura Pearl at 8:03 AM