Mary at the Olympics

When you watched Jamaican sprinting superstar Usain Bolt, a devout Catholic, win the gold in the 100m, did you notice that he was wearing a Miraculous Medal? 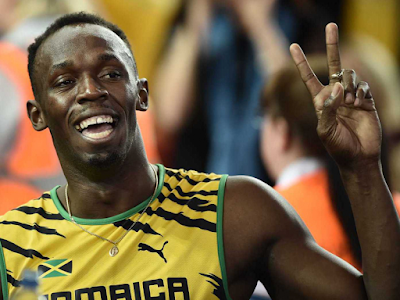 You can read more about this inspiring champion, and his devotion to Our Lady, here.

Bolt was not the only track athlete showing his love  for and gratitude to Mary at the games.  Here's a picture (along with a caption) that one of my friends shared on Facebook. 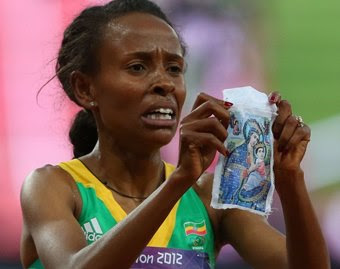 "At the conclusion of the women's 5000m finals on Friday, gold medal winner Meseret Defar of Ethiopia showed where her help comes from. Immediately after crossing the finish line, she pulled a picture of Our Mother of Perpetual Help from under her jersey, showed it to the cameras and held it up to her face in prayer."

And it's not just the Track & Field athletes who pray to Our Blessed Mother for help before competitions.  Gold medal swimmer Katie Ledecky reportedly prays a Hail Mary before every race.  (Here's an article about Ledecky, if you'd like to read more.) 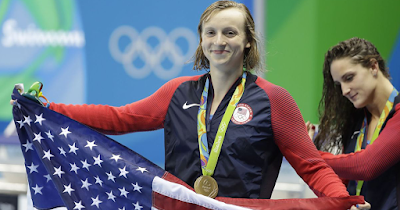 I think it's interesting that these athletes with strong Marian devotions are the ones winning the gold medals.


Some might argue that surely, in our crazy, messed-up world, God has more important things to worry about than who wins an Olympic gold medal and who doesn't.  But I would argue that this highly visible world stage in Rio--where athletes from all over the world have come together for sporting events that have millions of people tuned in and glued to their televisions--is actually a perfect venue for promulgating devotion to the Mother of God.  It is an opportunity for so many viewers to see that She listens to the petitions of those who believe in Her and have faith in Her intercessory powers with Her Beloved Son.  It shows that as God-less as the world seems to have become, there are still many faithful among us, even though their voices are often drowned out by the louder ones of the non-believing minority.

If Bolt, Defar, and Ledecky had not even qualified for the finals, would anyone even know about their love for Mary?  Would these stories about medals and prayers be plastered all over social media?  Probably not.  So I don't think it's any coincidence that they've been among the athletes who've stood out at these games.  They have been, in a way, agents of evangelization.

I am so incredibly touched by the stories of Marian devotion that have come out during these Olympic games.  I have not been watching religiously, so I may have missed some.  If you know of any others, please share them with me in the comments!
Posted by Laura Pearl at 9:26 AM