Advent Activities (and a Giveaway Reminder)

I get excited when it's time to pull out our oversized Advent wreath each year, and to light a new candle each Sunday--something my hubby and I used to do with our boys, but which we now do together (unless he's off on a trip to somewhere else when he'd rather be home with his favorite girl; then I have to do it alone).  It sits atop a coffee table that's 36 inches by 36 inches, and it fills up most of the tabletop.  Go big or go home; that's what we always say. 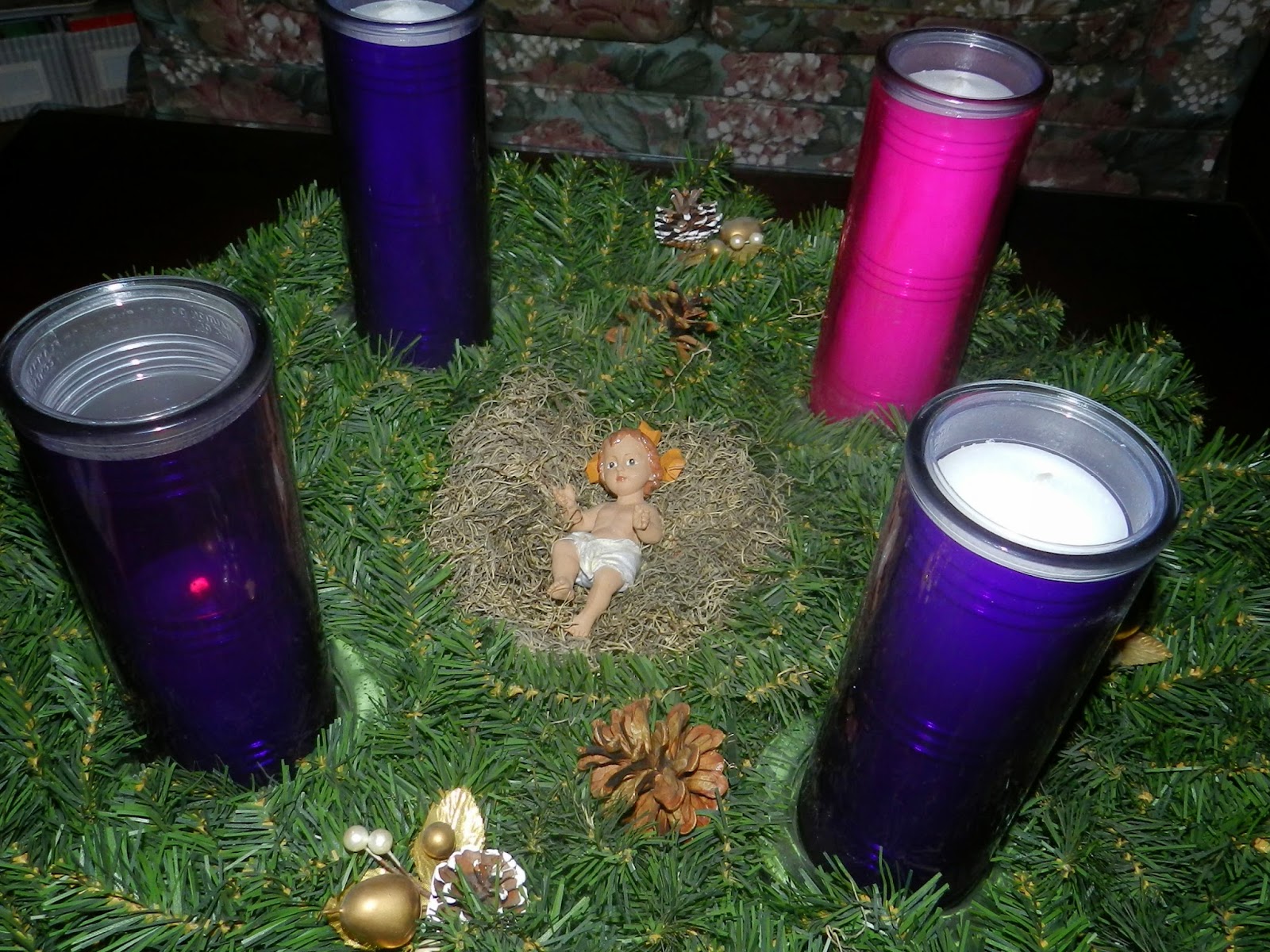 I love this wreath.  We made it ourselves, many years ago.  My husband used his jigsaw to cut out a huge plywood "doughnut" shape, which I then painted green.  I glued lots of faux greenery to the wood, leaving room for four round glass discs--which I found on the cheap at Wal-Mart to hold the pillar candles, and glued onto the wood as well.  We ordered our large 7-day-burning candles, which we keep lit throughout the week, from a Catholic church supply company.  A few years ago, I added a straw-filled "manger" and Baby Jesus to the center of the wreath.

We love to pass by the darkened living room at night and see those Advent candles glowing, a constant reminder of the true reason for the season.

I finally got the tree all decorated--which is a massive feat, if you know how many ornaments I have!  There are more ornaments per square inch on that 9-and-1/2-foot artificial tree than the law allows.  (I actually ran a "guess how many ornaments I have" contest here at String of Pearls in 2013, and I gave away a hand-painted Santa ornament as a prize.  The number then was 439.  And it's grown.) 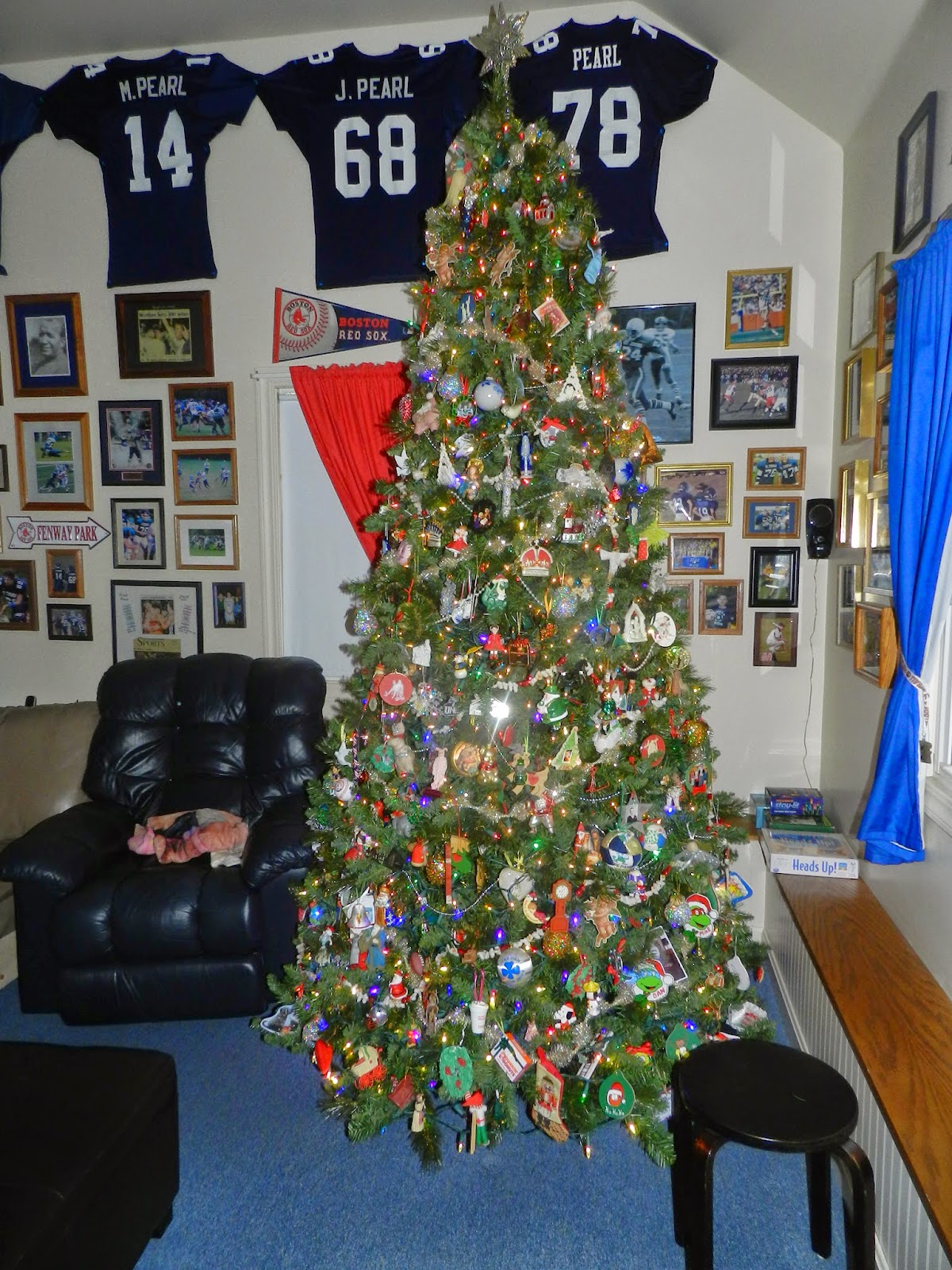 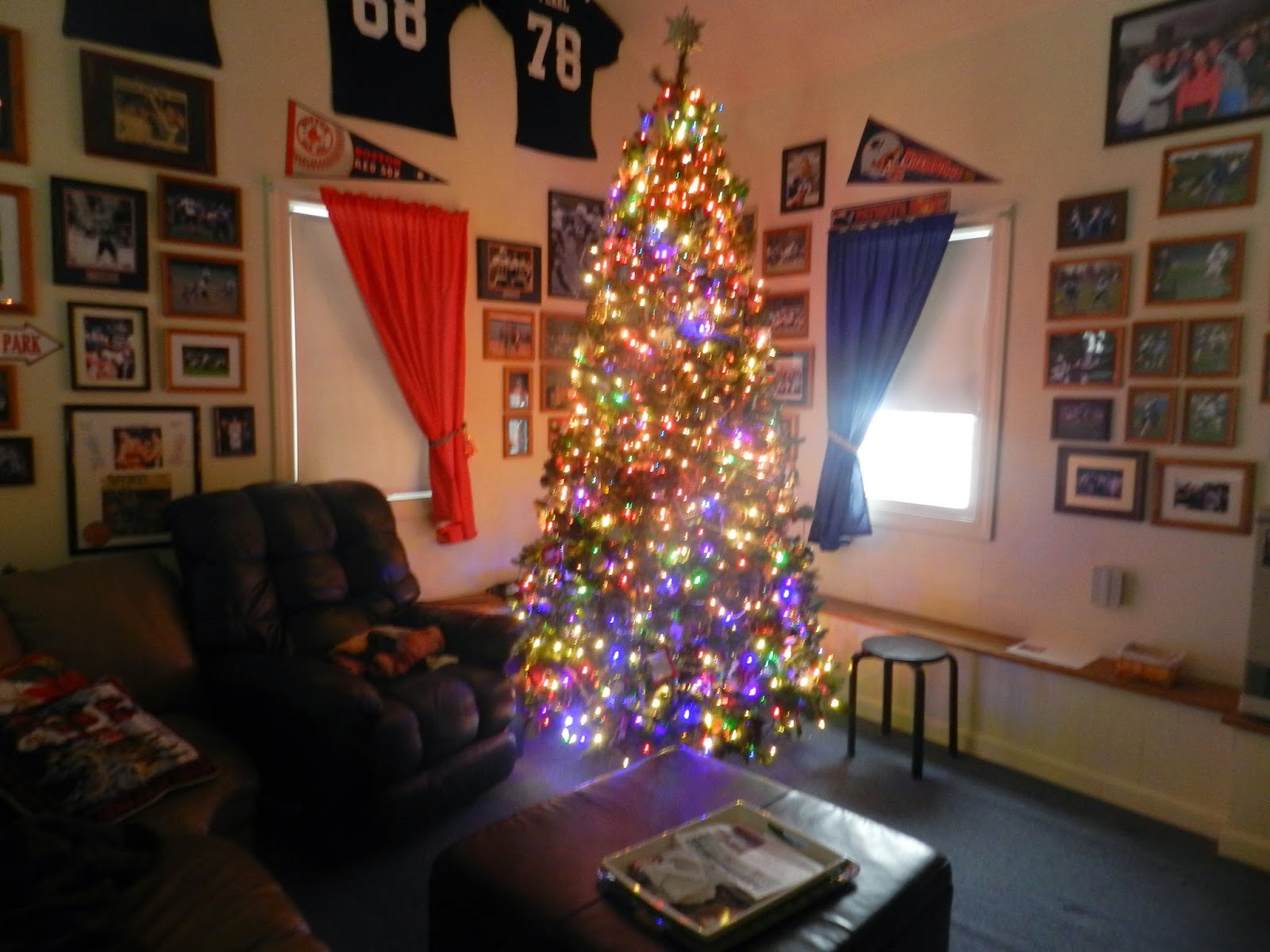 Not to be outdone by Mrs. Excessive, my husband (a.k.a., "Clark Griswold") has increased the number of lights on the tree.  When we succumbed to the ease of an artificial tree a while back, after years of going to a local Christmas tree farm with our sons to cut down our own, it came with 1,000 white lights on it.  When partial strands started to go out, we painstakingly removed all the attached lights and added our own.  This year, there are 2,500 lights on there (a combination of white and colored), and it looks magical.

I have acquired two new daughters-in-law since last Christmas, so I needed two more stockings.  I was all set to go out and buy them, but then I remembered my stash of lovely fabrics and laces, which I found in my dear late mother-in-law's attic (a treasure-filled place--piled to the rafters with material and other notions--that could have been a satellite store for JoAnn's Fabrics.  And that's not an exaggeration!).  I was pleased that I had some lengths of cranberry-colored velveteen, as well as a half-dozen linen and lace napkins that are way too beautiful to let my family wipe their gravy-stained mouths on them at holiday dinners.  So I used the lace parts of two of the napkins to embellish a pair of identical stockings, one for son #4's bride Braveheart and one for son #2's bride Ginger 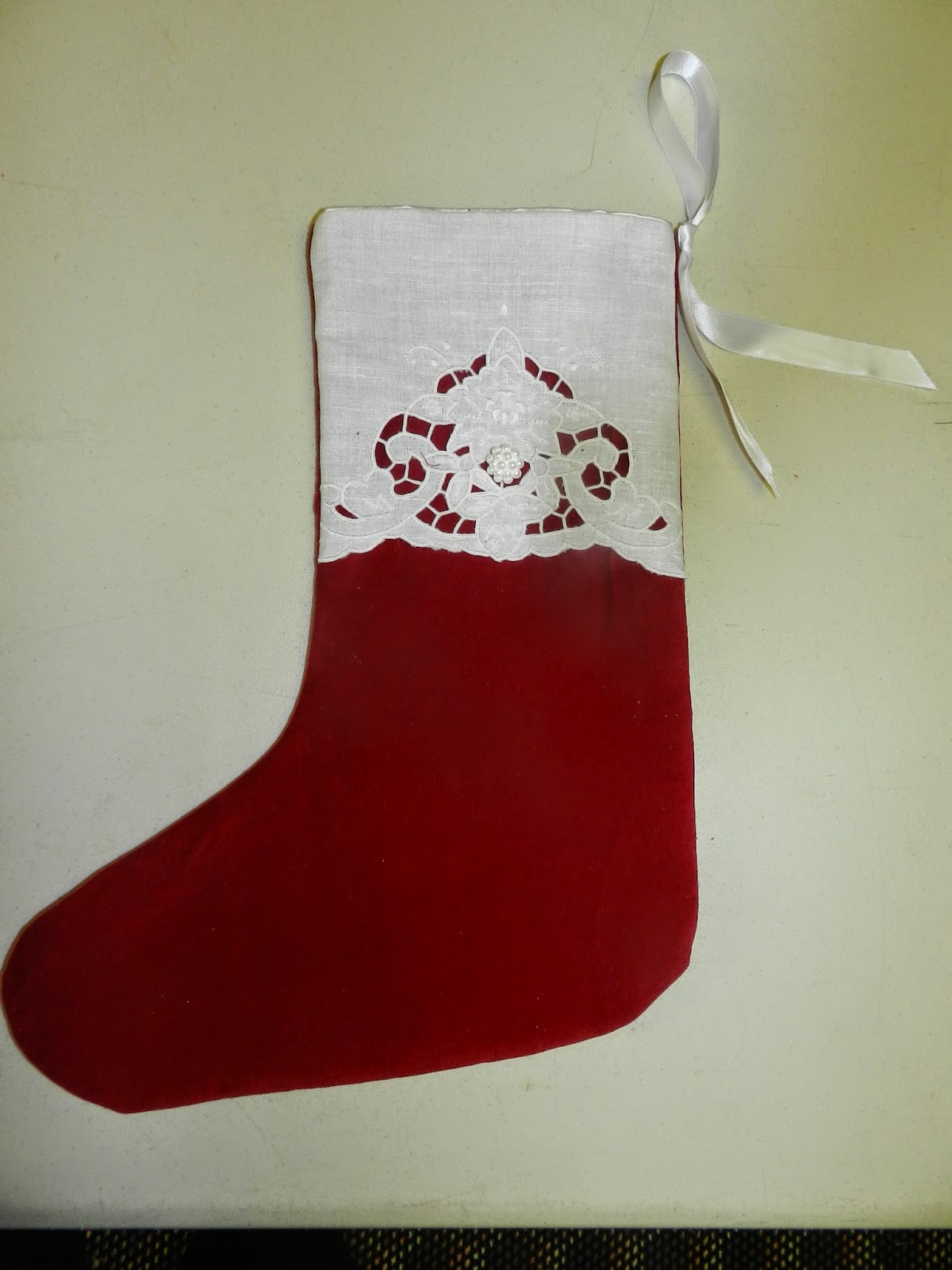 Both stockings are lined with off-white satin, remnants from the three dresses I made for the older flower girls in Ginger's wedding party.  So there's all kinds of nostalgia sewn into these stockings, which makes them that much better in my book.  I just have to write my new daughters' names on them, above the intricate cutwork, with fabric paint.  (I KNOW, professional embroidery would be so much classier...but there's nothing like that homemade touch, right?)

Well, I have to go...because I'm in the middle of a big project--some gifts I've been working on for my boys.  I can't show you yet; some of them actually read this blog, so that might ruin the whole surprise.  But I'll show you after Christmas.  :O   (That's my excited face.)

Before I go, don't forget to leave me a comment, for a chance to win a signed copy of Erin's Ring.  (If you want to learn more about this Catholic YA novel, click on the image of the book's cover there on the sidebar.)  I'm taking comments until midnight on December 8, and I'll announce the winner on the 9th.

Happy Advent to you and yours!