A Trio of Adorable Flower Girls

Our wee twin granddaughters have just survived another stint as flower girls--their third such stint in the past eleven months.  Three of their uncles have gotten married in less than a year, and all three wanted their beloved nieces to play this special role in the festivities.

Back in December of 2013, for the wedding of son #3 and Preciosa, Bonny Babe panicked and wouldn't leave her mother's side; Cutie Pie raced down the aisle alone, straight into Papa's waiting arms; and the third flower girl, the six-year-old daughter of the bride's cousin, ended up walking down by herself, carrying the "Uncle M, here comes your bride" banner that the twins were meant to carry as a pair, with her following along right behind them.  It didn't go off as planned, but was very cute nonetheless.

Just a couple months later--in February of 2014, when son #4 married Braveheart--the twins were to be the only flower girls in the wedding.  That time, we decided from the get-go that we shouldn't put everyone through the stress again; so when my husband and I processed down the aisle ahead of the wedding party, we each held the hand of one of the twins, and their mommy followed closely behind holding their baby sister, Little Gal.  (There were no older flower girls involved in that wedding.)  It all went off without a hitch; and although the way our sweeties came down the aisle wasn't textbook flower girl style, it was very sweet.

This time around, there were five flower girls altogether: the twins and three older girls (the bride's niece, along with the daughters of two of the bride's friends).  During the rehearsal, we tried to get our granddaughters to process down the aisle with the other three, but they weren't having it.  The poor things--for every single wedding with which they've been involved, the ceremony has taken place right in the heart of what would be their nap time!  So Papa and I asked if we could just do a repeat of the February performance, and let them come down the aisle by our sides, holding onto our hands.  It was absolutely the right call!  They are just too young for the job, in our opinion.  Five- and six-year-olds make ideal bridesmaids, but younger girls are not always ready to be in the spotlight like that.  At least ours aren't, because right now they're just too shy.

So that's how it went with this latest wedding of son #2 and Ginger: we got the little girls down the aisle and happily seated up front with us; and later, the three older girls came down together.  They were just precious!  All somewhere in the neighborhood of five or six, those three girls were the perfect age for the job.  They looked (and I believe felt) like princesses in their satin dresses, carried bouquets, and wore flowers in their hair.  They were quite the trio of best buddies. 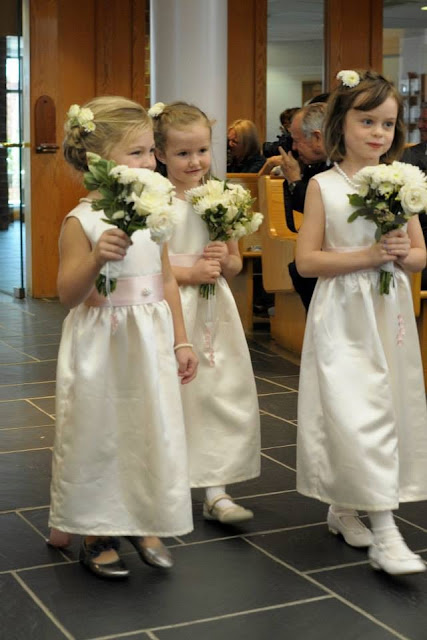 There aren't many little girls who have played this role three times between the age of two-and-a-half and three-and-a-half, like our twin granddaughters have.  I hope by the time our youngest son gets married, they'll be the right age for the job.  And perhaps by then, their little sister can be a flower girl right along with them!  With this in mind, I'm hanging onto these dresses I made.  All I'll have to do is change the sashes so the color matches the décor of the next wedding.  (I like to think ahead...but no pressure, youngest son!)
Posted by Laura Pearl at 11:16 AM