I know I haven't been around these parts too much lately.  But I'm still a blogger...I mean I'm pretty sure I am; it's just that I'm also an accidental jet-setter who's been to Memphis and Denver since we last talked, and now I'm here in Colorado Springs with the three cutest wee lasses west of the Mississippi (my granddaughters--and I know you might think there's some bias involved in that statement, but believe me there is not).

My husband and I didn't PLAN to go to Memphis on Sunday, but flights out of Boston to every single city that would provide us with a connecting flight to our final destination were seriously overbooked (as in, even paying passengers were getting bumped off of them).  It was a grim reminder that when flying stand-by, there are no guarantees that you'll get where you want to go, when you want to go.  But being able to take trips to see our granddaughters without paying for the airfare is such a marvelous privilege--and a job perk that I know lots of people would give their eye teeth for--that I hate to complain about the inconveniences we sometimes encounter (although I just did that, I guess).

Anyway, on Sunday there was only one flight out of Dodge that had plenty of seats on it, and that was to Memphis; and as it turned out, a flight from there to Denver the next day was wide open, too.  From Denver, we could rent a car and make it to Colorado Springs by dinnertime.  Okay then, we decided--Memphis here we come! 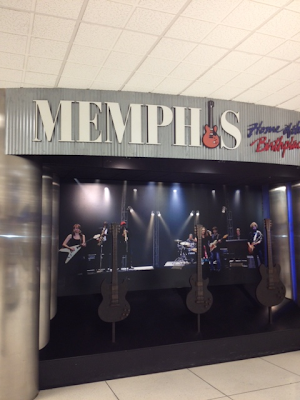 The best thing about our quick visit to Elvis's hometown was the lunch we had at the airport before our flight on Monday.  We decided to partake of the local cuisine and stopped in at a branch of Jim Neely's Interstate Barbeque for some sandwiches--pulled pork for my husband and turkey for me--and I've got to tell you, it was out of this world.  The barbeque sauce was so delicious (I could practically drink it straight up, no lie) that we asked if they sold it and sure enough they did, so we came away with one bottle--along with a brochure for ordering cases of bottles to have delivered to our house way back east.  Turns out we'd just stumbled upon a famous Memphis eatery--a Memphis tradition since 1980, in fact--that was named by People Magazine as the #2 place to eat barbeque in the whole US of A.  Maybe our unplanned detour to Memphis wasn't such a bad deal after all, we thought.

Since arriving in CO Springs on Monday night, we've been hanging out with a trio of cute little buggers.  Here are twins Bonny Babe and Cutie Pie, dressed up in their ladybug and bumblebee Halloween costumes, watching a little video about...hmmm, what do you know?  Bugs. 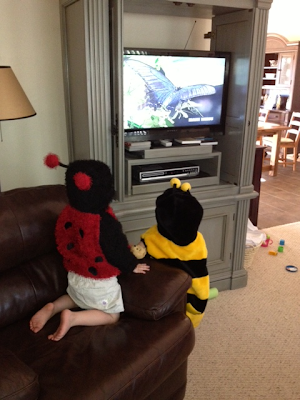 Those costumes, which their mommy picked up Wednesday morning at a huge consignment sale that she went to with the baby while Papa and Grammy stayed behind with the twins, are going to get a lot of use, it seems.  They are apparently the perfect attire for eating breakfast as well as watching nature shows. 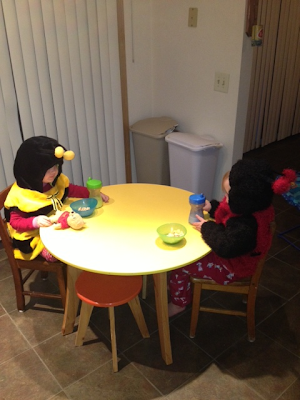 ﻿
The twins, now almost 28 months old, are incredibly bright--talking in complex sentences and using four-syllable words, singing songs, reciting their storybooks verbatim, and asking endless questions.  They pronounce "TH" as "B," so when they hear a strange sound they'll ask, "What's bat moise?"  They pronounce "N" as "M," so when they drop something they'll say, "Oh, mo."  Papa and I hope they never learn how to pronounce those sounds properly.  We could listen to them chatter in their inimitable style all day long.
Their younger sister Little Gal has become a very, very busy little bee.  She's 7 months old now and doing the Army crawl all over the place.  She's a petite one--only 14 pounds--but incredibly strong for her size.  She pretty much cranks out endless push-ups during tummy time and seems to like hanging out in the "upward dog" position, making it look effortless.  She's also the happiest baby I've ever seen--it takes almost nothing to make her smile and laugh. 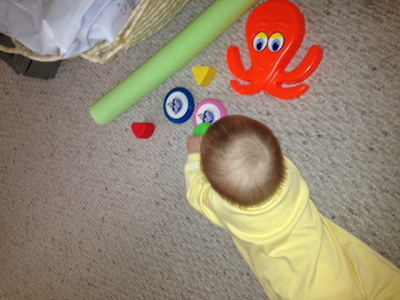 Time sure flies when you're surrounded by all this cuteness.  It seems like we just arrived, and already we're getting ready to leave.  We will be flying out of here tomorrow morning, bright and early, headed for a football weekend at the University of Notre Dame (permanent home of the Fighting Irish as well as temporary home of our own baby boy, who's a junior there).
Before I sign off, I just wanted to let you know the latest buzz in the Pearl household: my second oldest son just started a blog of his own.  (He joked that he's in the family biz now, since both his mom and his older brother's wife are bloggers.)   My darling boy is a 28-year-old high school math teacher, a young man who cares deeply about faith and family, and a funny guy who's always been a great storyteller.  If you'd like to check out his brand new baby, Pearl's Musings, I think you'll enjoy it.
Hopefully, I'll be checking in with you again from beautiful South Bend, IN.
﻿
﻿
Posted by Laura Pearl at 4:06 PM