Fun at the Zoo

My husband and I just returned from our latest jaunt out to Colorado to visit with our oldest son, our daughter-in-law, and their three little girls aged two and under.

It's amazing how much being a grandmother has done to cure my lifelong fear of flying. Nowadays, my overriding fear is that I'm going to have to go too long without seeing my little sweetie pies--and if that means I have to two-leg it by airplane halfway across the country time and time again to see them, then by golly, I'm going to do it!

The last time we were out there was around Mother's Day, and already they have changed enormously.  The twins are talking non-stop, in sentences, and practically reading their little storybooks verbatim (which reminds me very much of a two-year-old boy I used to know who looked an awful lot like they do, only with a white-blond Dutch-boy bowl cut instead of the fine, honey-colored mullets of his offspring).  Little Gal is over four months old now, smiling to beat the band and trying to keep up with the conversational skills of her big sisters in her own inimitable way.

Papa and I took a trip to the zoo with our three girlies and their mommy on Friday, and I got some great shots of them making friends with the giraffes.  They were thrilled to pet them and feed them lettuce and crackers. Unfortunately, the giraffes were the first animals on the tour, and pretty much everything else the twins saw afterward paled in comparison.  (I mean, the elephants were awesome and all, but unlike the giraffes, they weren't close enough to touch.) 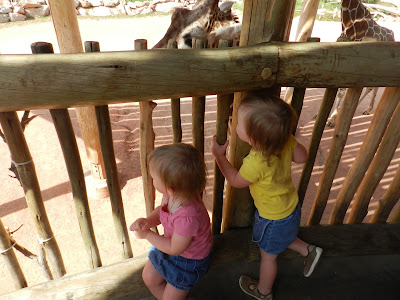 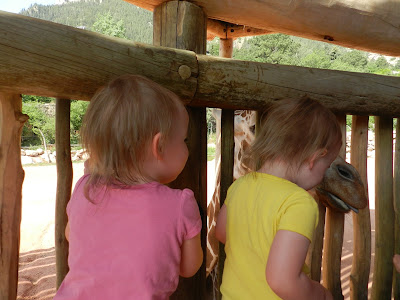 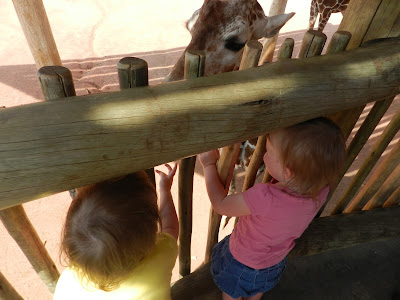 As if the giraffe exhibit wasn't enough excitement for two pint-sized animal enthusiasts, Bonny Babe and Cutie Pie also got to go for a train ride.  (That's them in the back of the caboose, wearing the matching pink sun hats Papa and Grammy couldn't resist buying them at the zoo souvenir shop.) 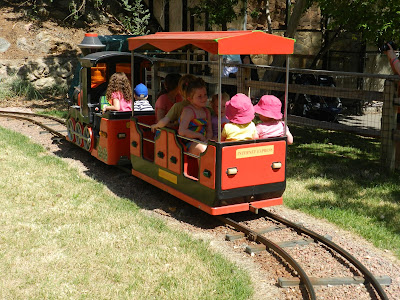 My hubby assured me that our little darlings would be fine, but I was a bit of a wreck inside as we helped them into the seats and then watched the ride operator fasten the ridiculously loose-looking seat belts that were ostensibly going to keep them from panicking and trying to climb out of the train while it was moving.  (This is how my brain works.  It's almost a miracle that my sons aren't a bunch of timid fraidy-cats--and I know they're not.  As you may recall, my youngest son is training to jump out of an Army airplane as we speak.)
The twins looked happy for the first five or six loops around the track, but then Cutie Pie began to cry and kept her head down for the last two (which ripped my heart apart, practically).  But she didn't try to stand up or get out of the caboose, and I was so proud of the way she bore up bravely until the ride was over.

My husband and I put the twins to bed last night, because we knew we weren't going to see them this morning (they're a couple of early birds, but we knew we'd be leaving for the airport well before their normal wake-up time).  We finished up the nighttime routine of stories, prayers, and songs, turned off the light, kissed them each multiple times, and told them we loved them.  As we were leaving the room, they both said "I wuff you," and that about did us in.

My husband and I feel so blessed to have these three precious girls in our lives, and with another son getting married in December, we look forward to adding more grandchildren to our family tree.  What a joy it is to live long enough to see your children's children!  We get sad when we leave them, and wish they were closer so we could spend time with them every day.  But we'll take whatever we can get!  And if we have to go by car or by plane or by train (or by foot!) to see them, that's what we'll do.
Posted by Laura Pearl at 9:16 PM