I was just watching "Fox and Friends," the Fox News version of "Good Morning, America"; and just when I thought I'd heard it all, I heard this: there is a federal judge in this country who wants to have four of the Ten Commandments stricken down.  That's right.  A judge has decided that he knows better than the Big Guy upstairs, and he thinks that four of the commandments God gave to Moses on Mount Sinai should no longer apply. 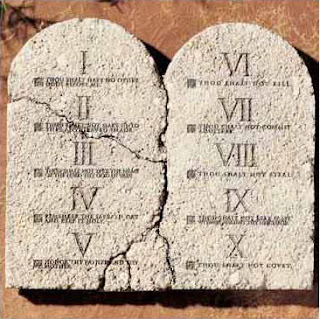 I am speechless.  I truly did think I'd heard it all.  Apparently not.

I apologize, because for the second time in the year or so that I've been blogging, I am commenting on a story that might come under the label of "politics."  When I began "String of Pearls," my intention was to write about everyday subjects near and dear to my heart: my family, my Faith, baking, sewing, books, art, holidays, sports...I figured that there are plenty of political bloggers out there for those who are interested--and writing about some of the crazy things going on in Washington these days would only raise my blood pressure and make me unhappy.  I think of working on this blog as my "happy time," so I've been determined to steer as clear of political controversy as I  possibly can.

But this is unbelievable!  And I consider it a matter of Faith more than a matter of politics.

Whenever a group of public high school football players makes a free will decision to kneel in prayer before a game, the liberal hue and cry of "separation of church and state!" is deafening (which I find sad, because separation of church and state doesn't mean that prayer can never take place on public grounds; it only means that the government can't force prayer to take place).  So tell me, how in the world can a judge--who clearly represents the state--think he has the authority to mess with the Ten Commandments, which have formed the basis of Christian belief for thousands of years?  Shouldn't those same people who get angry when boys pray before a football game be angry about this?  And if they aren't, what does that say about them?

I only caught a teaser about this story, which I believe will run in full on Fox later on tonight.  I'm going to have to do some digging, because now I'm very curious to know which commandments this arrogant judge has decided we no longer need to follow.  My goodness, what's next?  As Michelle Malkin pointed out on "Fox and Friends," it makes you wonder if the next step will be using the courts to try to get the name changed from "commandments" to "suggestions."

Lord, have mercy!
Posted by Laura Pearl at 8:56 AM