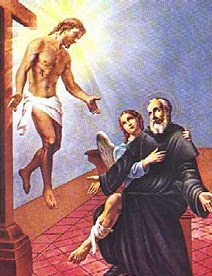 May 4 was the feast day of St. Peregrine, the patron saint of those who are afflicted by cancer.  This powerful Catholic saint, who died in the 14th century and was canonized in the 18th century, began his life as far from Christ as he could be.  A rebellious and violent youth, he was part of a street gang in his hometown of Forli, Italy.  He even physically attacked a priest who came to preach the Faith, and when this priest responded by forgiving him and turning the other cheek, he was so deeply moved that he began to repent of his evil ways.  Peregrine reformed his life, became devoted to the Blessed Virgin Mary, and eventually became a priest himself.

Peregrine developed cancerous sores on one of his legs, and it was determined that the leg would have to be amputated.  The night before the operation, Peregrine prayed before an image of the crucified Christ.  He had a vision in which Jesus came down from the cross and touched his cancerous leg.  When he awoke the next morning, all evidence of his cancer was gone.  He lived for twenty more years, spreading the teachings of Christ.

Most of us, unfortunately, know of someone who has been stricken with some form of this disease.   There are few words that strike more fear in one's heart (and the hearts of his loved ones) than when he is told, "You have cancer."  A loved one of mine has recently been diagnosed with the disease, and I'm turning to St. Peregrine.  His intercession has aided countless sufferers, and for this he has been given the title of "Wonder-Worker."

PRAYER TO ST. PEREGRINE
O great St. Peregrine, you have been called "The Mighty," "The Wonder-Worker" because of the numerous miracles which you have obtained from God for those who have recourse to you, you who for so many years bore in your own flesh this cancerous disease that destroys the very fiber of our being, and had recourse to the source of all grace when the power of man could do no more; you who were favored with the vision of Jesus coming down from His Cross to heal your affliction, ask of God and our Lady the cure of these sick persons we entrust to you.  [Pause here and silently recall the names of the sick persons for whom you are praying.]  Aided in this way by your powerful intercession, we shall sing to God, now and for all eternity, a song of gratitude for His great goodness and mercy.  Amen.
Posted by Laura Pearl at 7:10 AM