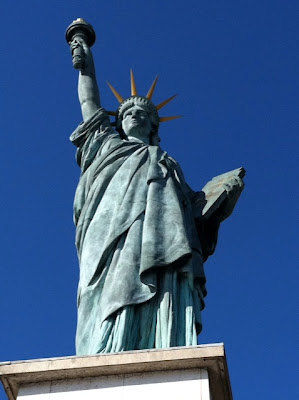 On Memorial Day, I thought I'd post a tribute to the Statue of Liberty--a symbol that would not even exist if not for the bravery and valor of America's military forces throughout her history.

This photo was not taken in NYC; it was taken by my husband a couple of days ago when he was on a trip to Paris.

In 1876 (the centennial of the signing of the Declaration of Independence), French sculptor Frederic Auguste Bartholdi was commissioned to make the Statue of Liberty as a gift to the United States from France, in recognition of the friendship between the two countries during the American Revolution.  The larger version, of course, is the one millions of immigrants to this country passed in NY Harbor on their way to Ellis Island, when they came here in search of the American dream: life, liberty, and the pursuit of happiness.  But a second, smaller version of the statue is located in Paris, near the Grenelle Bridge on the Ile aux Cynges, and this is it.

There would be no Statue of Liberty, no Declaration of Independence, no liberty and justice for all within the borders of this great country, if not for our heroic veterans and our selfless fighting men and women.  Today, we thank them for all they have done, and all they continue to do, so that we can enjoy the freedoms we so often take for granted.
Posted by Laura Pearl at 2:16 PM