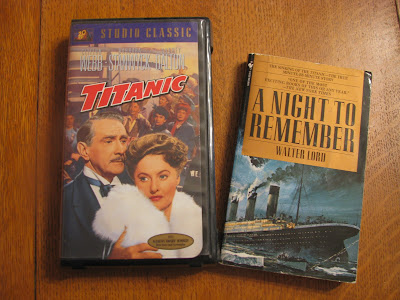 April 14, 2012 was the 100th anniversary of the sinking of the Titanic. I would have blogged about it on that date, but I was down in VA with my husband, where we were visiting two of our sons--and so writing about a UVA lacrosse game we attended with them took precedence over everything else, even remembering the events of a fateful night in history that shocked and changed the world. But I thought today I'd write a little something about a tragedy that has fascinated me and countless others over the past century.

Back in 1997, when James Cameron's blockbuster movie "Titanic" first came out, my sons who were in middle school wanted to see it in the theater in the worst way. Everyone and his brother had seen it, and everyone and his brother was raving about how awesome it was. It was the water fountain topic du jour on the second floor of St. Mary Academy. Since it was rated PG-13--and in our experience, some of today's PG-13 films would have been rated R at one time--my husband and I pre-screened it in order to determine if our boys would be allowed to see it. Most of it was fine, we thought; but the fact that Kate Winslet's Rose appeared naked from the waist up, and the camera lingered on her--just so that Leonardo DiCaprio's Jack could be shown sketching her nude image--caused us to make a command decision that didn't earn us any brownie points with our sons.

Sorry, guys. The captain says it's a no go.

At the time, a friend who had a houseful of daughters and no sons told me that she thought we were being a bit ridiculous. After all, she explained, that scene with the nudity was all about "art." But my husband and I believe that anyone who thinks a pre-teen or teenage boy sees "art" when he looks at a naked woman is only fooling himself. It was hard having to say no, it really was. When just about all of their friends were seeing the big new hit movie, we knew our boys must have felt pretty unlucky to be saddled with such hopelessly strict and old-fashioned parents. That was tough, we realized; and we did empathize. But we didn't relent.

We ended up ordering an old black and white Twentieth Century Fox film of the same name on VHS, starring Clifton Webb and Barbara Stanwyk, thinking that if learning the story of the famous sinking of the "unsinkable" ship was what they were interested in, the boys might watch it and enjoy it. We never could talk them into watching the 1953 movie (they always had a real hang-up about black and white movies, automatically judging them awful; besides, kids these days are utter special effects snobs, having been raised on computer-generated imagery!); but my husband and I watched it and thought it was wonderful. Webb and Stanwyk play a well-to-do married couple traveling on the Titanic with their daughter and son. The father is inordinately proud of his boy, who is about 11 or 12 and has just graduated from wearing short pants to wearing long ones--which at the time was symbolic of a boy becoming a man. But during the trip, Stanwyk's character comes clean about a long-ago affair and discloses that the boy is really not her husband's biological son. He is angry and bitter, and he turns a cold shoulder to the son he has always adored.

When the Titanic begins to sink, the father puts his wife and children in a lifeboat and prepares to go down with the ship, along with so many other heroic and self-sacrificing men who did so that night. But the boy jumps out of the lifeboat and goes in search of his dad, wanting to be a man like his father. When the dad (who thought he couldn't love the boy anymore because of his wife's betrayal) is reunited with him and realizes how brave his son is and that the two of them are going to die together, he is visibly shaken, and it's obvious that he's filled once again with pride and love for him. This is one of the most touching scenes I've EVER seen, in ANY movie--and that includes the sad death of Jack in Cameron's much more widely-known "Titanic."

The older film has the added bonus of starring a young, gorgeous Robert Wagner as the love interest of Webb and Stanwyk's daughter. When I was 11, Wagner starred in a T.V. show called "It Takes a Thief," and I was madly in love with that guy--and completely destroyed when my mom informed me that he was the same age as my father!

In honor of the 100th anniversary, James Cameron's "Titanic" has been re-released in 3-D. I suppose I can't forbid my boys to see it, now that they're all grown up (dag nabbit!). But it still sticks in my craw that Cameron included that gratuitous nude scene. It didn't add a thing to the story--and in fact detracted from it, in my opinion. The 1953 version doesn't have all the modern special effects wizardry that Cameron's has, but I think it's superior in every other way. (Sorry I ruined the heart-tugging ending...but watch it anyway! It's great.)

In 1997, all the hoopla surrounding Cameron's film got me so interested in learning more about the true Titanic story that I went out and bought a paperback copy of A Night to Remember. Written by Walter Lord and published in 1955, when many of the survivors were still alive and could recount their experiences, this book is a page-turner that gives a timeline of the events of that fateful night in chilling and absorbing detail. I devoured it. Couldn't put it down.

I recommend both the 1953 film "Titanic" and Walter Lord's book A Night to Remember for anyone interested in learning more about the fascinating and heartbreaking story of the night the Titanic hit an iceberg and sank, and so many poor souls lost their lives in the freezing waters of the Atlantic--a story of hubris, bad luck, miscommunication, sadness, fear, hope, class division, cowardice, heroism, faith, and so many other things, all rolled into one.

I've re-read the book recently; now I need to watch that wonderful old movie again!
Posted by Laura Pearl at 7:36 AM