I know I've mentioned this many times (too many times, I'm sure), but I just love anything old-fashioned, antique, vintage, or Victorian. If something looks just plain old, I'm drawn to it. I have a set of five Christmas tree ornaments that are among my very favorites, even though they are just made of cardboard. They are lovely images of Victorian Santas and children, printed front and back with mirror images so that even if they spin around when they're hanging on the tree, they look great from every angle. Here is an example of one: 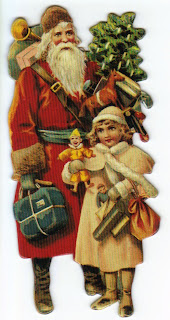 Isn't this sweet? And it looks absolutely wonderful on the tree, proving that an ornament doesn't have to be costly and breakable to be precious.

Technically, I'm not even sure if this is supposed to be Santa Claus as we Americans know him, that rosy-cheeked, cookie eating guy with the belly that shakes like a bowl full of jelly whenever he laughs. Actually, this looks more like the tall, thin, long-robed European version of Santa called "Father Christmas." In fact, now that I think of it, he looks very much like the "Pere Noel" my husband and I spied on the streets of Nice in early December. Check him out: 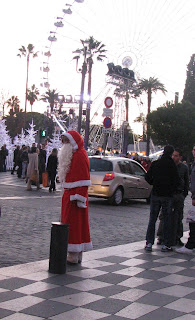 Strolling around the ville one day, we saw some street performers. One of them was a young, skinny Pere Noel (it may have been this same guy) shuffling around lazily, with a hat at his feet for those who wished to express their appreciation for his performance by using that language we all understand, money. My husband and I had to laugh. "He's not even trying!" we said. I mean, this guy was not spinning on his back and flipping and doing crazy hip-hop street dancing moves. He was shuffling. Lazily. It was really kind of funny. That Santa couldn't dance, but we got a kick out of him. And he did have a certain je ne sais quoi--a certain Old World charm, I suppose--thanks to that vintage-style Father Christmas robe.
Posted by Laura Pearl at 6:54 AM