When you think of Leonardo da Vinci (1452-1519), you immediately think of the brilliant, iconic paintings for which he is famous, like the "Mona Lisa" or the "Last Supper"--at least I do. Yet da Vinci also produced a huge collection of black and white sketches that resulted from his studies of a plethora of subjects in which he was interested--like science, engineering, mathematics, warfare, animals, and human anatomy, to name a few. He was an inventor, too, who was way ahead of his time: for instance, in 1488 he drew designs for a flying machine. (Thanks a lot, Mr. d! Love them flying machines!) But that was not all; he also drew designs for helicopters, parachutes, steam engines, boats, submarines, tanks, and catapults. Obviously, da Vinci was a genius, a true "Renaissance man" if there ever was one.

This is a drawing that I had tacked up on the bulletin board in the basement "classroom" where my husband and I homeschooled our youngest son from 4th through 8th grade. Leonardo da Vinci drew this picture of a fetus in the womb in 1489, long before there were sonogram pictures to offer visible proof of pre-born life. In his day, this would have been the ultimate pro-life poster, wouldn't it? 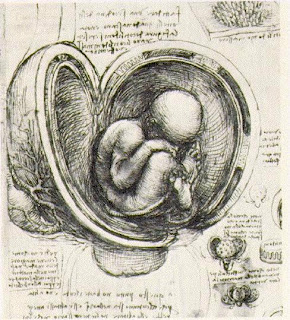 We studied da Vinci and other painters of his time in our homeschool art class during 5th grade, and one time I came up with what I thought was a nifty assignment for my son: I drew a rough outline of the "Mona Lisa," with her head missing, and I told my son to finish off the picture any way he wanted. Here is the resulting masterpiece, for your viewing pleasure: 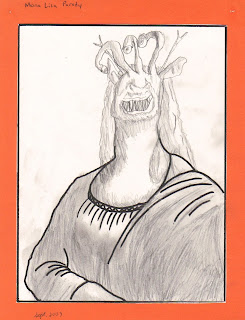 That's right: it's Mona Lisa (whoever she was) as an alien. What can I say? My son was a typical ten-year-old boy when he drew this. But look at that attention to detail! Notice the precision of the pencil strokes that produced such beautifully shaded areas! I like to believe that Leonardo wouldn't have been too offended by my baby's drawing, and might in fact have appreciated the creativity of a young, up-and-coming artistic genius. If not, my apologies to serious da Vinci fans everywhere.
Posted by Laura Pearl at 6:14 AM